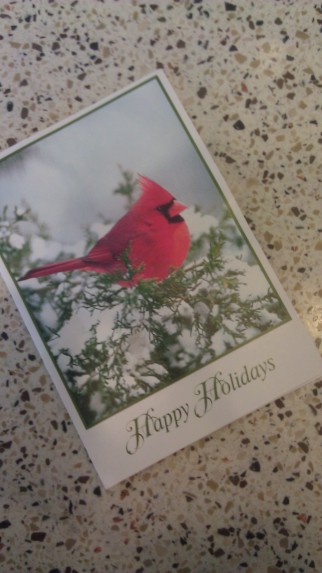 So today, I received the Christmas card that you see above. I thought it was a bit weird that it had no return address. Nevertheless, I opened it and read what was in the card, which I want to share with you.

Joe,
Came to service when you did a sermon. We were shocked that you were envious of your wife’s new toy! So petty. Then to state your only a youth pastor!! Found out that’s what you hired for -dud. Then to say- your other friends are – full pastors. Gee. Envious again? Perhaps if you didn’t say 3 words and stop – then continue would help us not fall asleep or want to throw up. So many many pauses. It’s as if your brain is short circuited. Perhaps a speech class would help you or even your wife could help you do full sentences. Listen to your self and for 2012 you CAN improve. Really. What’s with all the hand rubbing too? Sweat? Do you go over your sermon before giving them? Wasn’t impressed. Not happy with your youth, get a new job. We’ll try again to come back for the other guy.

(I copied the letter word for word, so the grammatical errors are not mine. Though in the following paragraphs you may find some errors. Those are mine, unfortunately).
I guess that’s having my ass handed to me on a Christmas card.
I shared this with my wife and a couple of people on staff. And I don’t think they found as much humor in it than I did. I think they may have been a bit more upset than I was. Which kinda made me feel bad.
But, really I feel thankful that they felt that way, really. I mean, it would be pretty funny if I showed that to my senior pastor and he said, “Yea. About that… I think they raise some good points.”

But, I honestly found the card to be hilarious.

The good thing is, my ego is big enough, and I’m self confident enough that this didn’t phase me at all.
The bad thing is, I have a big ego and can be a tad bit full of myself.
The good thing is, I have become good at ignoring people’s comments, whether it’s praise or criticism. (My football coach once told me, “Don’t let success go to your head and don’t let failure go to your heart.” I’m sure that wasn’t his quote, but it stuck in my heart).
The bad thing is I have become good at ignoring people’s comments. Now, there are a few people that I would take their words to heart and really listen to them and try to apply what they are trying to impart on me.
The church staff. My family. My good friends. A few church members.
But honestly, majority of what people say, especially their praises and compliments goes in one ear and out the other. Which is good and bad, I have to admit.

My favorite part of this card was that it was on a Christmas card! With the inside saying, “Wishing you all the Joy of the Season and a Happy New Year!”
The person handwritten it, so something about me didn’t sit well with him. At all. Obviously.

And, I think I let Rob Bell influence my preaching style more than I was aware of (or maybe willing to admit.) Because. Rob. Bell. Pauses. A. Lot. To. Drive. His. Point. Home.

where a few words occupy one line

even if it’s not a complete sentence

therefore, probably wasting a lot more paper than he would need to.

With all that said, it’s probably good to take note how I may be completely misunderstood in my sermon. (click here for the audio of that sermon, if you want. But beware, you may fall asleep or feel like throwing up. I do not take any responsibility of how you may react to the sermon, my voice or the delivery style.)
I started the sermon out with the 10th commandment, “Thou shall not covet” and went into how I covet more than I’d like to admit. Like my wife’s new toy, which was an iPhone 4. Then, coveting my colleagues “jobs” or where they are at their careers. Leading into how we may start thinking the grass is greener on the other side. But, really, the grass is greener where we water it. And that I am trying to find contentment in where I am in my life, because I’m so thoroughly blessed. Then borrowing from Rob Bell, I ended the sermon with the 10th commandment and how some Rabbis said that the 10th commandment is also a reward; that if we live the first 9 commandments faithfully, that if we were to live in God’s plans and dreams that He has for us, we wouldn’t want to be anyone else. We wouldn’t want to covet. And how I hope to live a life like that.

But, people will always hear what they want.
There’s nothing more I can do. Really.
Although, the wife points out that I make tons of grammatical mistakes, both in my writing and in my speaking. And… I can’t really use the English-is-my-second-language excuse anymore.

But it is what it is.
I initially read the card, laughed and threw it in the trash next to the apartment’s mail center. Then a few minutes later, I regretted throwing away the card, so I went back to the trash can to retrieve it. I felt like I was holding onto some sort of ministry comedy gold… or at least a future sermon illustration

Whether good or bad, I have never really gave concern about who likes me and who doesn’t. Of course, there are certain people who I want to earn the respect of, and who I want to like me.

But at the end of the day, I’d like to say that  my concern isn’t focused on whose side I’m on or whose on my side. I don’t worry about who likes me or who doesn’t like me.
But I want to focus on, I want to make sure that I’m on God’s side and that I am obedient to what God is calling me to do.
And often times, I found that focusing on that helps me to be a better pastor, Christian and a person.

Hopefully, if that family does come back, they’ll like the “other guy.”
…but I’m not holding my breath because whether my senior pastor wants to admit or not, we’re similar.
And that’s a good thing. For him. 😛