I’m not the best person to really write about this…

My formative childhood years were spent in Columbia, South Carolina. When I was in elementary school, I was the only one of my kind in my classes. And kids made it known that I was different. I grew up wanting nothing more than big, blue eyes and blonde hair.
Subtle racism has followed me all my life. As a teenager, a grown man came up to me and asked if I could see okay compared to everyone else and walked away. It took me a second to realize he was referring to my eyes.
I’ve played the “Where are you from?” game with many folks because saying “I’m from the States” isn’t a satisfactory answer enough.

I’ve been called Gook. Chink. Jap.
I’ve had people leave messages on our answering machine with “ching chao chang ting chong” because our answering machine message was in Korean.
I’ve been told to go back to my country. Learn English (annoying enough, sometimes by people who I speak English better than).
I’ve had people, whom I don’t know, how much they hate Chinese and Commies.

And because of this, I went through a long period of my teenage life holding a grudge against white folks. I went through this intense Korean-pride stage where everything Korean was much preferred to anything American. I’ve been a bit racist myself. And as much as that phase is long gone from me, some remnants of that phase still remains.
I’m less tolerant of racial remarks made by white folks because they were the cause of most of my pain being an Asian growing up. I’m quick to call out insensitivity regarding race from white people, but snicker when it’s made by other ethnicities.

I’ve used the “I don’t speak English” card  to get out of so many things, so many times, it’s embarrassing.

With the rise of Jeremy Lin, I think there’s a bit of pride rising within all Asian-Americans. Jeremy Lin isn’t a Yao Ming who was brought from China. Jeremy Lin is from the States. He’s one of us, children of Immigrants. As much as I dislike the New York Knicks franchise, I want Jeremy Lin to succeed. I watch every hi-light. Try to catch all his games.

But with all the joy that comes with Jeremy Lin, also comes the painful memories of the past that many of us Asian Americans had to grow up with. And even though the stupid stereotypical and racist remarks have been a few, it’s enough to tarnish the overwhelming joy of Lin succeeding in the NBA.

Here are a few examples that I’m sure by now I’m beating a dead horse:
Jason Whitlock of Fox Sports:

Here’s what I think was an awful mistake more than malicious intent which eventually led to the person losing his job. Yet not reprimand has been handed to Mr. Whitlock from Fox Sports, which I view as a bigger offense than ESPN’s mistake. “Chink in the armor” is a fair  sport’s cliche. It’s overused. It was just an oversight, I believe, that using that cliche with Jeremy Lin wasn’t going to be a great idea. Jason, on the other hand, was intentional and not even remotely funny. (Sadly, yes, if it was funny, I wouldn’t have been as annoyed.) 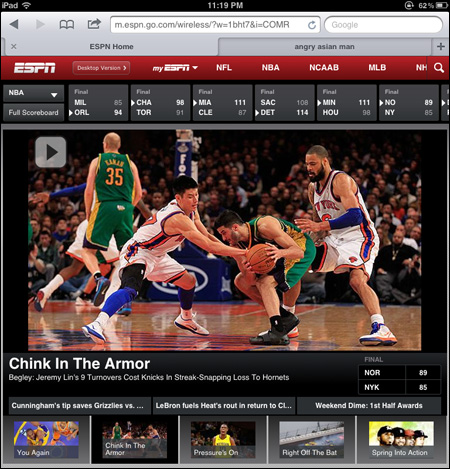 Outside of the Lin-sanity, here are some other examples:
A barista of Starbucks in GA decided to write this where the customers name goes for 2 Korean customers:

Or this from Papa Johns:

Or this from Chic-Fil-A of UC Irvine:

Or the horrible portrayal of an Asian-American in CBS’ 2 Broke Girls.

This is the time where I wish I was eloquent and a good writer to express my point.
But I’m not.

I can’t help feel a bit annoyed and/or angry when people can tweet or say ignorant stuff, and laugh it off. Then give a half-baked apology blaming everyone else, like your mom or Richard Pryor, but yourself (a la Mr. Whitlock).
And, no, it’s not really okay to point to a random Asian and start calling him Jeremy Lin.

As an SNL skit pointed out, we can’t use all the stereotypes of Asians to describe Lin-sanity and think that it’s funny and okay. (http://www.hulu.com/watch/331272/saturday-night-live-cold-opening-linsanity-postgame)

The good thing is, I guess, is that people are becoming more aware of racial insensitivity and as Bill Plaschke wrote, Jeremy Lin is holding a mirror up to America.

But There’s no need to get angry. Or find ways to get even.

The grace in all this… is that God made us to be different and unique. And those differences need to be celebrated. (I think that Jeremy Lin should be celebrated as a good point guard for the Knicks, and at the same time, for being Asian-American.)
But with differences brings fear.
If we let it, fear can be much louder and overpower love.
And if we retaliate, much like Ms. Hyun did with her awful, inexcusable, malicious, ignorant and racist tweets, we cause a further rift and maybe even confirm fears (or stereotypes).

No, instead, we know that love drives out fear.
So to truly bring reconciliation and education, we need to do it with love and grace for only love has the power to conquer all fear, ignorance

2 thoughts on “A Chink in the Armor – You Lin Some, Dim Sum You Lose”