The big “D” for the Cowboys must stand for “Dysfunction.”

And all the dysfunction in Dallas begins with their loud and proud owner, Mr. Jerry Jones.

This week, it was revealed that Jerry Jones had taken away the play calling responsibilities from head coach, Jason Garrett and gave it to offensive coordinator, Bill Callahan.

This is Garrett's system. His creation. His plays. His players. He knows that system inside and out — he created it! He knows what plays will work in what settings and situations. So, with the play calling responsibility taken from him, what does that leave him with? He's not a defensive minded coach nor does he have that much say in what goes on the defensive side of the ball. He took pride in his abilities to call plays. He has done it for quite a while for the Cowboys, even when he was the offensive coordinator under the, then defensive minded head coach, Wade Philips. (Who, btw, had a miserable tenure as a Cowboys head coach. He had one of the best defenses in the league with the Chargers — pre Jerry Jones — and has one of the best defenses with the Texans — post Jerry Jones. At the beginning of his tenure, the Cowboys had a top 10 defensive team. The latter half of his tenure — and when Jerry got more involved (my opinion) the defensive ranked 28th in the league).

What role does Jason Garrett have, now? An expensive motivational speaker? Isn't he a sitting duck of a coach, now?

In my humble opinion, the biggest problem in Dallas never was its personnel and players. It's always been their meddling; micromanaging; insisting to be on the field with players; insisting to be in the locker room; egotistical owner, Mr. Jerry Jones. Jimmy Johnson's Cowboys could've won a lot more Super Bowls, but Jerry just couldn't stand that Jimmy was getting all the attention.

The head coaches of the Jerry Jones era never had a chance to establish themselves as the leader of the team — because Jerry's always there undermining his coaches (whether he knows he's doing that or not). The players know that Jerry Jones is always going to be there for them — so why listen to a coach trying to discipline you, when you can above him and talk to the owner? In fact, why listen to the coach, at all, when you know that Jerry Jones holds all the authority and power?

It's like why ever listen to Dad, when you know Mom's going to let you do whatever you want?

In ministry setting, pastors and leaders like Jerry Jones are frustrating to work with. You bring people onto the team to do a specific ministry or certain things, and instead of letting you do the work; they're constantly hovering; criticizing; giving input; flat out telling you how to do yor job. And because of the helicoptering and micromanaging, nothing gets done. 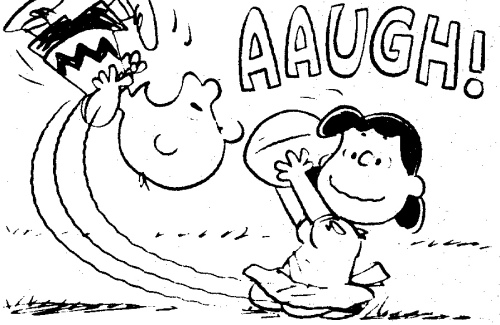 Lucy is the leader/pastor. The football is the responsibility/ministry. And Charlie is the person who thinks they're responsible for a ministry. Does that make sense? No? Oh well…

But guess what? When the person misses the ball/fails, we — as leaders– are going to blame them for their incompetency. Much like how Jerry blames (and fires) the coach for a team that continues to under achieve.

We have to put our egos aside and realize that God has created people who are more talented and smarter than us. And not only is that more than okay, it's a reality. So, instead of being afraid of that, we need to embrace that — and recruit those people to be on our team. One aspect of being humble can be intentionally surrounding yourself with people that will make you the dumbest person in the room.

And when they are on our team, we need to trust them and give them space and a chance to succeed (and fail). Sure, we can guide them and mentor them in the beginning, but that's a whole lot different than hovering and meddling and micromanaging.

Here's my bold prediction: As long as Jerry Jones' ego runs rampant in the Cowboys organization — the Cowboys will never be able to win a Super Bowl. The head coach needs a chance to be just that — a head coach. They need an honest chance to run the team; to discipline the team; to draft the players that will fit into their system. And you can't do that if the owner thinks he knows more football than the coach and tries to be the players's best friend.

Along that note, a ministry team will never flourish if the leader is always meddling and helicoptering over the teammates. People will fail. People will be frustrated. People will burn out. No matter how many cogs of the machine we try to replace — it'll always be destined to fall apart.

Here's to the Cowboys under achieving for the next decade!

2 thoughts on “Want to Have an Ineffective Ministry Team? Be Like Jerry Jones”