This week, we celebrate the kid’s 4th birthday.
Looking back at this year, I’m surprised the 3 of us made it this far — alive. Sure, my wife and I lost a little bit of sanity and we probably aged a bit in the past 8 months. But, hey… at least we have our…? … at least we have each other…?

There were many things we had to learn on the fly when he became a part of our family. Changing diapers, I have to say, was my least favorite thing of our time together thus far.

First off, I don’t understand how a body that small can produce so much poop. And the things that we cheered (and cheer) for. “YAY! YOU POOPED!!” My wife bravely took on the task of really potty training him. And she did it! She survived.

Man, if it was up to me, I’d still probably be changing his diapers. She had a plan. She had a goal. And she stuck with it. And we don’t have to buy diapers anymore.

I also can’t believe how much energy this kid possesses. It is unnatural. I’m beginning to think the people of the olden times were onto something by getting married at like 14 and having kids at like 15.
Every time I try to tire him out, it’s me who is exhausted. And he wants to do more. Always.
“Walk. Walk. Walk!”
“Buddy! We just walked for an hour!”
Takes a moment to think, then with a smile, “Walk!”

There have been frustrating moments, too. After all he’s three with some cognitive delays. But, for me, most of the frustration has been towards our foster agency and the county.

I was told to say nothing if I can’t say anything nice. So, “Nothing.”

Of course frustration is part of parenthood. At least that’s what parents have told us. Parenting is wanting to strangle your kid with unconditional love.

The picture in the title is one of my favorite pictures of him (that we can show. We’re not really supposed to post pictures of him on the web and social media). He’s walking around the neighborhood like he owns it. Ever so curious. Ever so observing. And ever so joyful and ever so joy-filled.
Always reminding me of what a wonderful world we really do live in.

As I mentioned in an earlier post, I have no idea what the future holds for the 3 of us.

The paradox of this situation is that he isn’t our kid, but he is ours. At least for the time being. And until that’s no longer the case, he’ll always be ours. I mean, regardless of where we may end up in our journey, this kid will forever be part of us –whether physically or spiritually.

But let’s not fret over things that haven’t happened yet.

Happy birthday to the kid whose name means “Gift of God.”

You have truly been a gift of God to us. 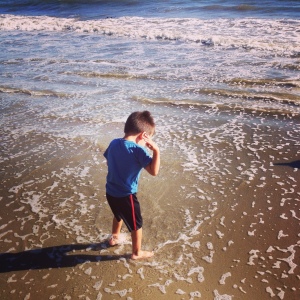