I had coffee with a good friend recently and we were discussing the necessity to fight to keep the institution honest — and avoid leaving it altogether.
We both carry with us the scars that we received from the institutions we serve — from fighting it and from fighting from getting institutionalized.

But I do know this: there will always exists plethora of problems within an institution.
Some are worth dying for — maybe not like a physical, literal death — but a professional death that will exclude you from that institution you gave your life to.
Some are worth the long and arduous — the full 12 round — fight.
And some simply are not worth your time and/or effort.
As a Korean Proverb explains: do not draw your sword to kill a fly.
Or, as Winston Churchill said: you will never reach your destination if you stop and throw stones at every dog that barks.
Both which are just another way of saying: choose your battles and choose wisely.

But I found two pitfalls with choosing your battles and choosing wisely.
The first I discovered is that we may not choose at all. It may give us permission to disengage from it all. In trying to figure out what’s worth it, we can decide nothing’s worth it; or not right now; or not this one — and we disengage and see how it plays out. Then we complain about how things turned out because we realize (too late) that hey, this was important to me wasn’t it? Now I don’t like how everything turned out.

The other pitfall is, we engage in everything.
We draw our swords to not just kill the fly; but the flea; mosquito; the ant; the cockroach; the (insert small insect — like bats* — here) _________.
So when the tiger shows up, we’re too exhausted to fight.
We spend so much time and effort squashing bugs, we don’t have the energy nor the strength to fight the things that really matter.

If we choose this route — of fighting everything — we also create for ourselves a steeper hill to climb.
Because, human beings have a fantastic ability to tune things out.
You can live within 2 miles of an airport, and eventually you’ll become accustomed to the planes roaring over your roof.

It’s like a car alarm. The first beep of the horn, you check to see if it’s your car. If it’s not, you ignore it. Once in a while you’ll comment — “Ugh, it’s going off.” But you continue to ignore it. And eventually, if it blares long and often enough, you no longer notice it. In fact, you notice it when it’s no longer going off. 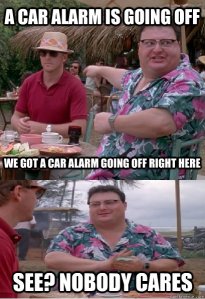 And like the boy who cried “wolf” (though slightly different context), no one took him seriously when there was an actual wolf.  (At least I think that’s how the story went…)

My point?
Don’t be apathetic.
And don’t be the car alarm that is ignored by everyone because you went off one too many times.

Don’t fight everything so that you can’t fight the things that matter to you.
At the same time, don’t have someone else shape your future choosing the path of least resistance and being apathetic.

Pray for wisdom.
Pray for patience.
Pray for grace.
Pray for love.
As you discern what you need to engage.
But also pray for courage.
Pray for strength.
Pray for boldness.
Pray for endurance.
And maybe a mean left hook as you step into the challenge(s) ahead of you. 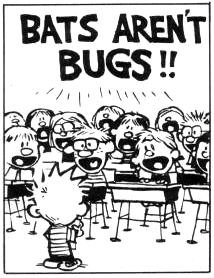 One thought on “The Boy Who Cried ‘Car Alarm’”